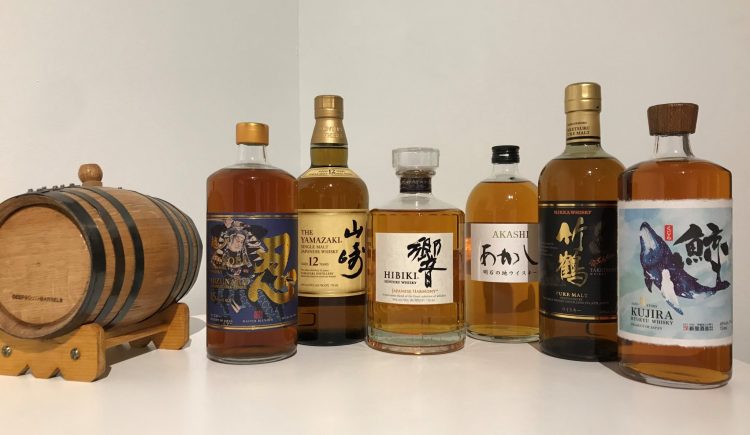 So you want to know more about Japanese Whisky.

We don’t blame you. Japanese Whisky is rapidly becoming one of the most sought-after and renowned spirits in the world. And the more you know about it, the more thoroughly you can revel in the experience. Are you ready to step up your Japanese whisky knowledge? Keep reading.

Here’s a brief breakdown to get you started.

In fact, you may have noticed the lack of ‘e.’ This is more than semantics. The distinct spelling nods to the distinct style of scotch whisky. Japanese Whisky has many similarities to its european cousin, like a reliance on malted barley and a history rooted in Scotland. While Japanese Whisky is the new(er) kid on the block, many experts agree that the mild texture and pleasant aroma of the Japanese-style rivals the best of Scotland’s exports.

It is, indeed, aged.

Like scotch, Japanese Whisky is usually wood-aged, oftentimes in American oak or in Sherry casks. Some are aged in Japanese Mizunara oak, which is unique to the Japanese style and results in specialty tasting notes like citrus, spice and incense. Shinobu Pure Malt 15 Year, for example, is aged in Mizunara oak and is known for mellow mizunara smoke aromas and flavors of cinnamon and ginger. Yum.

It’s great in cocktails. Or neat, or on the rocks…

Or however you normally like your premium whisky. ABV varies 40% ABV which is comparable to most scotch, so simply substitute scotch for a Japanese Whisky on any drinking occasion. Keep in mind that distilling is an art—each bottle a unique masterpiece that brings anything from spice, malt, nuts and fruit to smoke, herbs, citrus and honey. Keep exploring the world of Japanese Whiskys and you’ll start to decipher what’s great for a sour and what’s better straight-up.

A guiding concept in Japan meaning “Western, technology, Japanese spirit.” The phrase refers originally to the times of western modernization, when the Japanese were determined to adapt to new technologies while staying true to Japanese traditions. Today, Japanese whisky makers use the best technologies in the world, often imported from Scotland, and add a bit of the Japanese spirit. The result? A spirit, indeed. An award-winning, world-renowned whisky.

The philosophy of constant, continual improvement. True to their culture, Japanese whisky makers have a particular attention to detail and refusal to settle for anything but the best. When a whisky is made in Japan, you can be sure every ingredient and every part of the process was meticulously executed. This shines through in the delicate yet powerful characteristics of Japanese Whisky.

Now we’re getting to the details: how is Japanese Whisky made, and what makes it different?

Japanese whisky begins by importing barley from Scotland. Sometimes peated, sometimes not, and usually of the best quality available. LIke scotch, the malt is mashed and distilled twice in pot stills, which tends to yield more residual congeners that the distillers can choose to incorporate or cut. 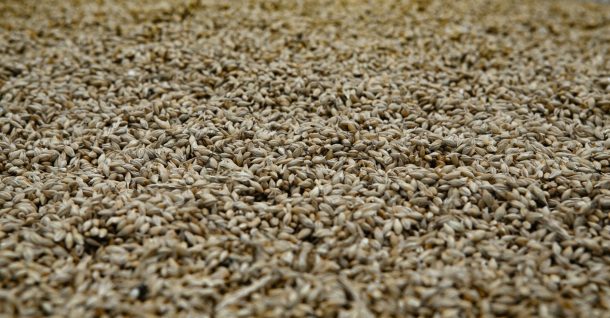 And then, they get creative.

Following the cultural prowess for innovation, Japanese whisky makers express their art in a myriad of ways. In fact, one of the reasons Japanese Whisky has gained such recognition is the ingenuity of those who make it. Japan’s distilleries are renowned for finding extraordinary ways to make their whisky distinctly Japanese. Stills are built in various shapes and sizes, as opposed to scotish stills which are all generally the same. Many Japanese makers experiment with different types of yeast that impart unique flavors in the finished liquid; some even grow their own yeast strand, like the famous Suntory distillery’s suntoryeus lactobacillus.

A defining factor of the many distinct, luxurious flavors we find in Japanese Whisky is the type of wood it’s aged in. Some of the most famed Japanese whisky’s mature in native Japanese oak, most famously Mizunara oak. Just like Japanese whisky, mizunara oak is gaining renown as among the rarest and most luxurious type of oak in the world. If you come across a bottle aged in Mizunara oak, like Shinobu 15 years, don’t let it pass you by. Due to the pure rarity of mizunara oak, prepare for higher prices. But it’s an investment in a truly special whisky experience.

And so does location.

Due to the eminent creativity and innovation of Japanese whisky-makers, you can find incredible variation in the market. However, generally across the board, Japanese whisky has upheld an emphasis on refinement and texture. Quality, and therefore pricing, is typically high. It helps to do a little research to know what you’re looking for. And hey—you’re doing that right now. Well done.

The million-dollar question: how did scotch whisky end up so well-made in Japan? Here’s a timeline of the whisky’s spirited history.

Japan had been in national isolation for 220 years under the Tokugawa shogunate, closed off to international trade. In 1854, US Commodore Matthew Perry was sent to the Edo harbor on a mission to change that. He sailed with giant black ships to the shore, forcing samurai rulers to open their gates to him—and to new trade routes—for the first time in two decades.

The journey across the pacific was long and cold for Perry and his troops. And what did they rely on to keep them warm? You guessed it. Whisky.

When the Japan-U.S. Treaty of Peace and Amity was completed, Perry held a banquet on his boat deck to celebrate. The whisky barrels were tapped, and many of Japan’s distinguished guests got their first taste.

Many trade agreements followed the work of Matthew Perry, and Japan opened its gates to western goods including beer, wine and spirits. Unsurprisingly, these were popular imports among the people, the whisky in particular. To keep up with demand, local brewers began experimenting with their own concoctions. These mostly consisted of alcohol mixed with sugar and other flavorings, then colored to look like whisky. Not exactly a refined product, but hey—it was a start. The start of something big.

There are two men that are widely accredited for the beginnings of authentic Japanese whisky: Shinjiro Torii and Masataka Taketsuru.

Torii, a pharmaceutical wholesaler who eventually found more success by importing Spanish wine, saw an opportunity to create the first true, genuine Japanese whisky. He had the business sense. But he needed someone who could learn the complex process of whisky-making—and learn it well. And so he found the perfect partner: Masataka Taketsuru.

Masataka Taketsuru was sent to Scotland to master the art of distilling. He had a promising prowess in Chemistry and shared Torii’s personal passion for whisky. While studying chemistry at Glasgow University, he took an apprenticeship at Longmorn Distillery. Throughout his time at the distillery he fastidiously studied their process and recorded everything he learned, so he can bring the best, detailed knowledge back to Japan.

To this day, Masataka Taketsuru is known as “The Father of Whisky.”

Shinjiro Torii, with the help of his partner Taketsuru, founded the first authentic whisky distillery in Yamazaki, near the ancient capital of Kyoto. This was an excellent choice of location, as Yamazaki was famed for it’s high-quality water. He called the distillery Suntory.

It took a few years for Taketsuru to brew something up to snuff for his boss Torii. Finally, Suntory introduced Shirofuda whisky. And the people loved it. So much so, a Japanese newspaper stated that there was no longer a need for imported whisky. The country officially had their own, Japanese-made whisky.

As can be expected, Masataka Taketsuru was inspired to set off on his own. He established Japan’s next distillery—known as Nikka—in the small town of Yoichi, where the climate and crisp air was similar to that in Scotland. Nikka’s first release was Nikka Whisky Rare Old.

When war came to Japan, the army and the navy proved to have an insatiable thirst for whisky. Military men spent so much time at the Nikka Distillery, likely taking a much-needed edge off, that the distillery was recognized as a military installation. As a result, Nikka and Suntory survived World War II, and went on to thrive when another military entered the market: the United States.

During the occupation period, American and British soldiers provided another influx of whisky drinkers. Nikka and Suntory thrived, as western influence caused a lasting growth in the market for whisky and other alcoholic drinks, like beer, wine, vodka and gin.

The water-and-whisky drink brought a whole new occasion to whisky, and made an astounding impact on Japanese food and alcohol culture.

Throughout the decade, the overall demand for alcohol was increasing and whisky was considered especially fashionable. The annual consumption of whisky in Japan has skyrocketed to about three litres per person. There were massive imports of whisky as well as a major increase in domestic brands. Many sake distilleries looked to capitalize on the opportunity and converted to whisky distilleries.

Due to some business and financial downtimes, some distilleries had to close. Most famously was the Hanyu Distiller, established in 1941 by the Aduto family, that was later bought by a Toa company. When the Toa company declared bankruptcy, the distillery had to close in 2000.

However, some of the bottles made by Hanyu are still out there. For example, may have heard of the Playing Card Series, which features 54 bottles modeled after the 54 deck of cards. The bottles in this series, among other rare bottles by Hanyu and other closed distilleries, are extremely valuable.

Fortunately, Ichiro Akuto was able to rescue the remaining stock of Hanyu Distillery and established Venture Whisky Ltd. in 2004. 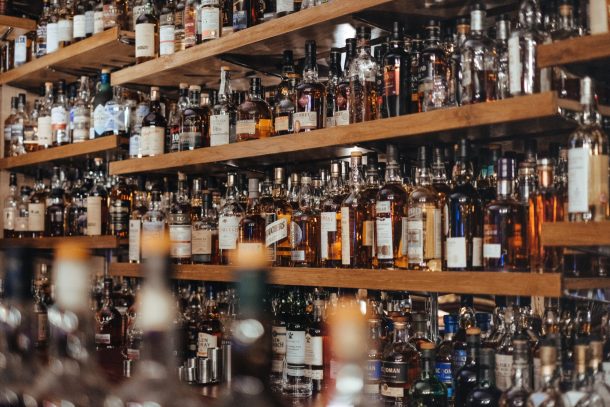 Here we are, in the midst of a worldwide infatuation for Japanese Whisky. Besides a history rooted in hard work and meticulous dedication, there are a few things to which we attribute this newfound notoriety.

No kidding. The 2003 movie “Lost in Translation” brought Suntory’s brand name to the big screen when Bill Murray’s character coined the unforgettable quote: “For relaxing times, make it Suntory time!” The mention helped spread awareness and affinity for Japanese whisky and helped whisky lovers from all over the world turn their taste buds towards the Pacific.

Japanese whisky is more than just a trend; Japanese distilleries have proved themselves truly worthy of the popularity by winning a number of international competitions and garnering praise from some of the world’s top whisky tasters.

In 2003, when Yamazaki 12 Years single malt whisky, made by our old friends at Suntory, became the first Japanese whisky to win the gold medal at the International Spirits Challenge. The ISC is widely regarded as the most authoritative liquor competition in the world, so this recognition certainly made waves.

And that was only the beginning. In fact, Japanese whiskies have won first prize medals in multiple categories at the World Whisky Awards every single year since 2007.

It’s no surprise that after these world-renowned awards, the popularity of Japanese whisky is not slowing down anytime soon. Today, Japan is the world’s third largest producer of whiskies, and claims 5 percent of the world’s whisky consumption. And you know what? It can only go up.

In fact, many distilleries have had a hard time keeping up with the growing demand and have discontinued certain bottles, like Hibiki 17 Year Old and Hakushu 12 Year Old. 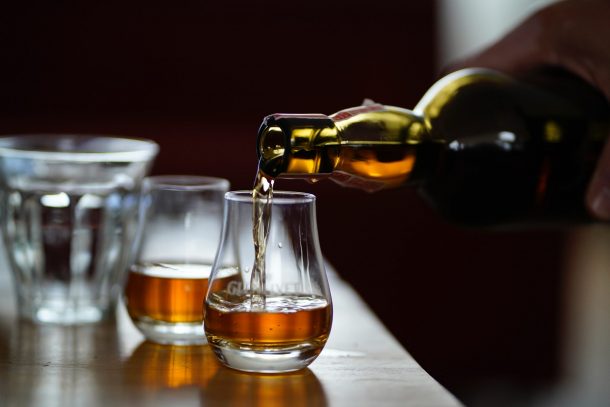 Now you have a better understanding of all this extraordinary liquid entails. Refined characteristics, innovative distilling, a charmed history and a well-deserved rise to fame all culminate into the beautiful liquid in every slow-poured glass. If you already loved it, now you know a little more about why. If you’re just entering the realm of Japanese whisky, welcome. Now is certainly the time to invest in this elegant, extravagant experience.